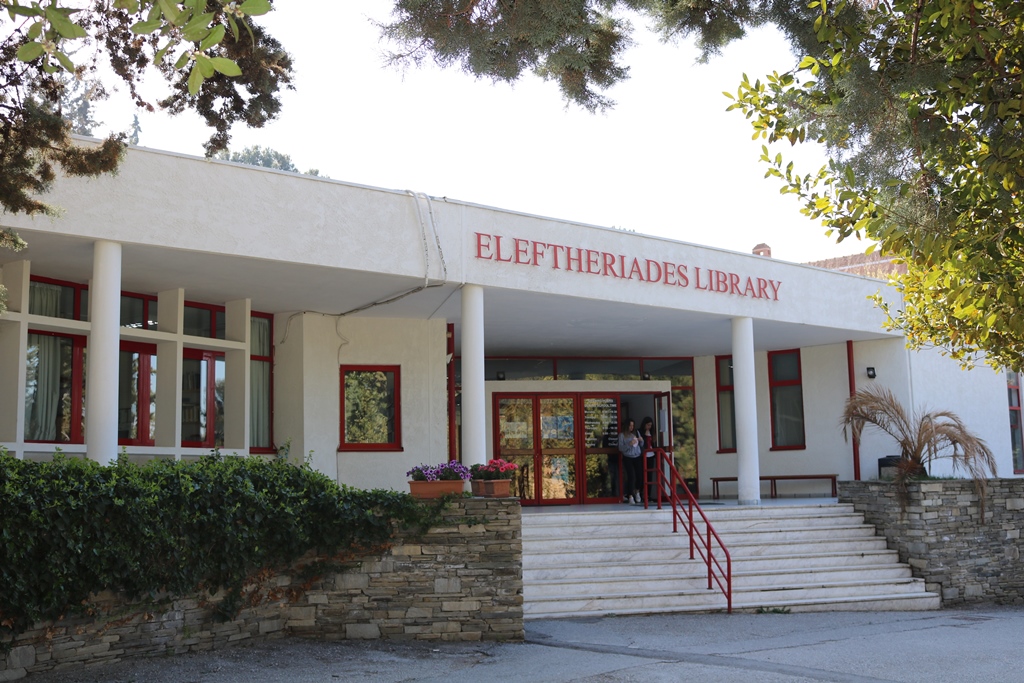 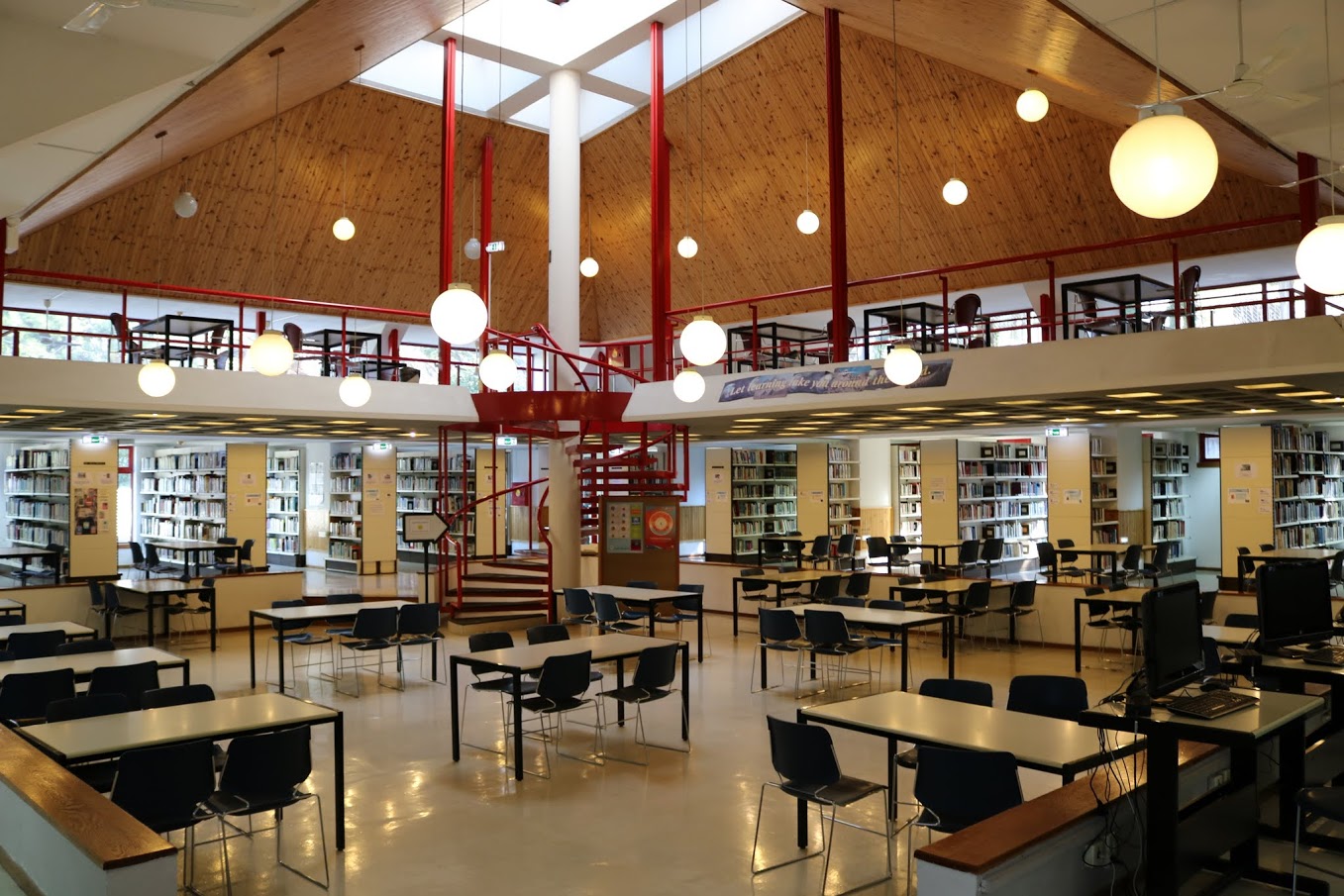 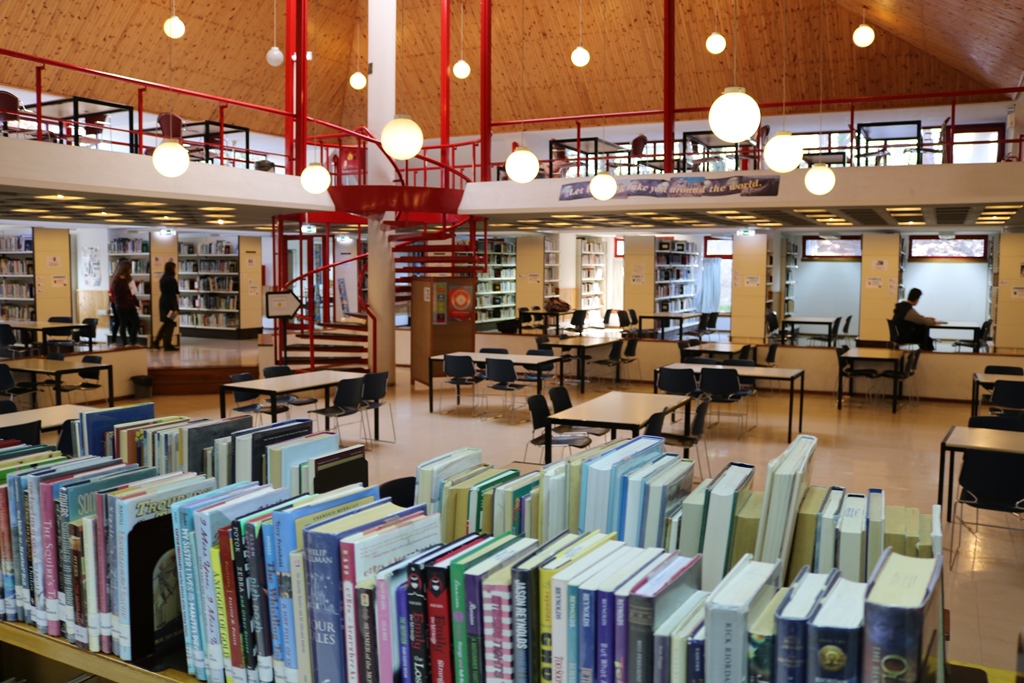 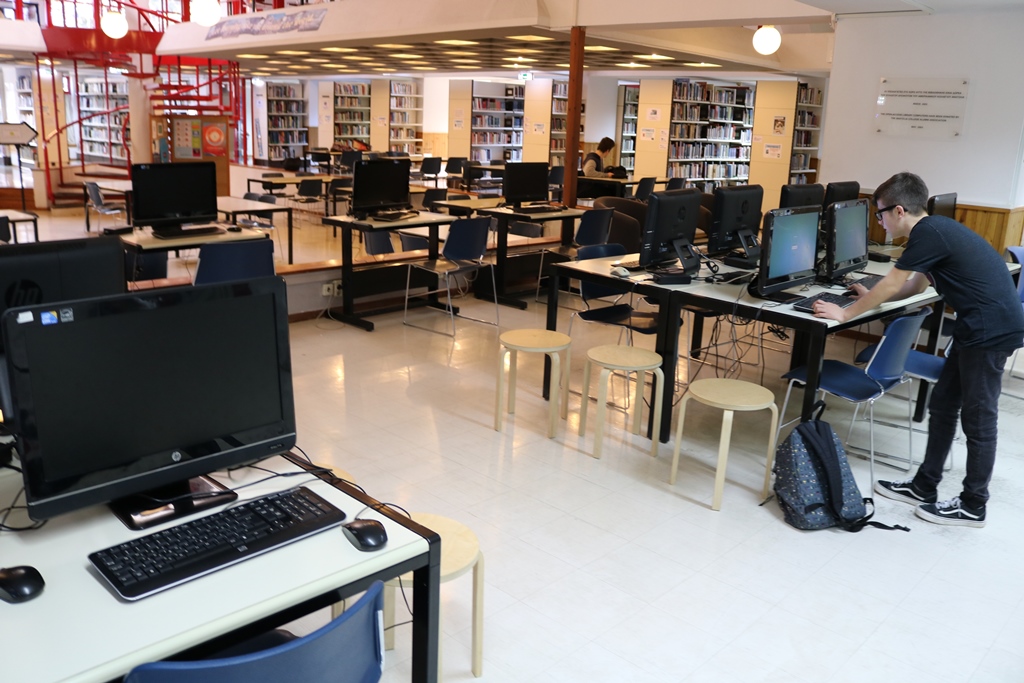 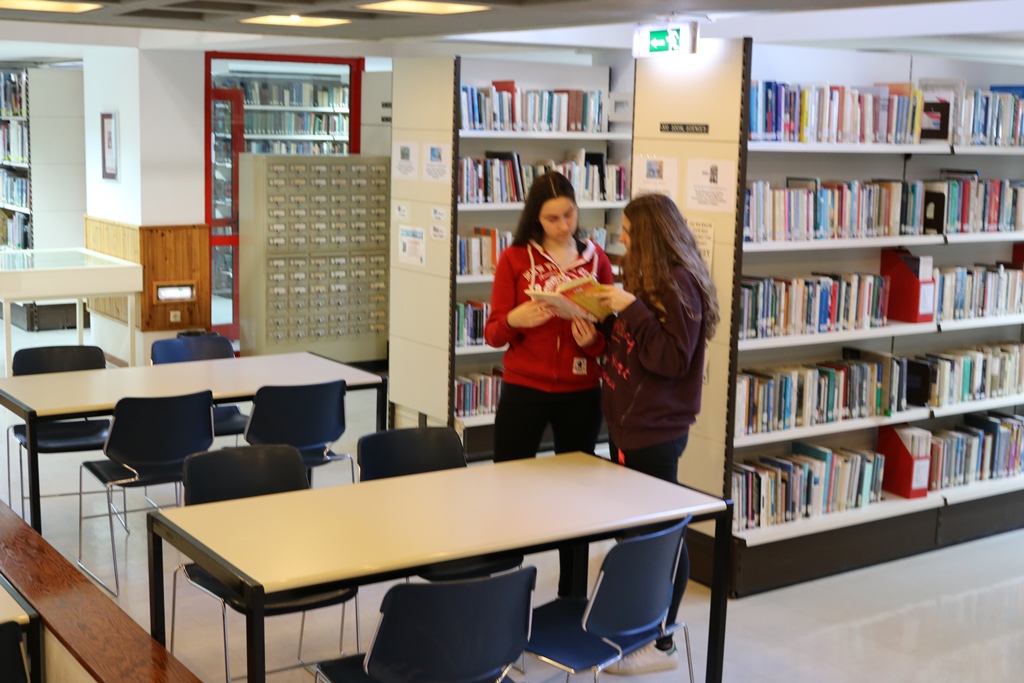 Recognizing the importance of independent research and learning, as part of the academic program, Anatolia College provides a library for the use of students, faculty and staff members. The first library of Anatolia was founded in 1924.

The current library, named after its donors, Socrates Eleftheriades and Olga Mavrophidou-Eleftheriades, opened in 1989, replacing the library which was located in the Kirides Science Building.

Students, faculty, staff and alumni of Anatolia are the primary users of this library, which aims at the provision of materials, equipment, and training for its students, faculty, and staff to enable them to satisfy their academic and personal informational and recreational reading needs.

The Anatolia College Library shares an integrated library management system with the Bissell library of the American College of Thessaloniki and the Anatolia Elementary School Library. Access to all collections is available through the web.

Olga Mavrophidou-Eleftheriades studied at the Universities of Thessaloniki, Cincinnati and California at Berkeley, and was a teacher of Greek philology at Anatolia during the 1940s and again in 1953-54.

Socrates and Olga moved to California in 1954 where Olga taught Greek language courses and published widely-used works on Modern Greek language for English learners, and Socrates was a Librarian at the Defense Language Institute in Monterey.

Anatolia College expresses immense and lasting gratitude to our benefactors, Olga and Socrates Eleftheriades, who generously donated their property, the accumulation of a lifetime of work and service, to Anatolia College for scholarships and support of the Library.

The Anatolia College Library was erected in 1989 through a grant from the United States Agency for International Development, and originally furnished by the Association of the Friends of Anatolia. The Library was named the Socrates Eleftheriades and Olga Mavrophidou-Eleftheriades Library in 1995.

Longer History of the Eleftheiades Library

A History of Anatolia College Libraries

Anatolia College is distinguished for being one of the first schools in Greece to build, fund and establish an independent school library with open shelves and free lending to students. At a time when most schools were content to provide a single textbook for learning, and very few invested in libraries, Anatolia College has encouraged independent reading from its inception in 1886.

Starting in 1901, the librarian filed an annual report regarding the total number of books available for circulation (about 5,000) in at least five languages (English, French, Armenian, Greek and Turkish), and the total number of books borrowed (in 1901, 5,540 books were borrowed, circulation exceeding the size of the collection). Each year the librarian urgently requested funding to “appease the literary hunger of keen young minds. Scarcely any need of the institution is more urgent than for good new books.”[1]

Although Anatolia College has always encouraged independent reading, sometimes there were dire consequences. In 1902, six Anatolia students were imprisoned for a year for borrowing “subversive books” from the school.[2]

In 1905, the librarian reported that the annual budget for buying books is less than $100, and that is too little for purchases that need to “keep abreast of the times.” However, even in 1905, the library maintained a significant collection of periodicals, including “Scientific American,” “Popular Science Monthly,” “School Science and Mathematics,” “Knowledge,” “The School World,” “Manual Training,” “Electrician and Mechanic,” “Chemical Engineer,” “Mining Journal,” and various other popular titles.[3]

By 1910, library hours expanded to include evening access. The annual acquisition budget was still limited to $88/year. Still, considering the time, it is remarkable that the College consistently provided and maintained a regular library budget without fail. And the Board of Trustees in Boston recognized the need, organizing a valiant fundraising effort to build a new library. The librarian reports that “Nobody of alumni, anywhere has shown a more loyal and self-sacrificing spirit. The effort of raising $2,500 is more strenuous that that which would be required to raise $2,500,000 among the alumni of old and settled institutions in the United States.”[4] 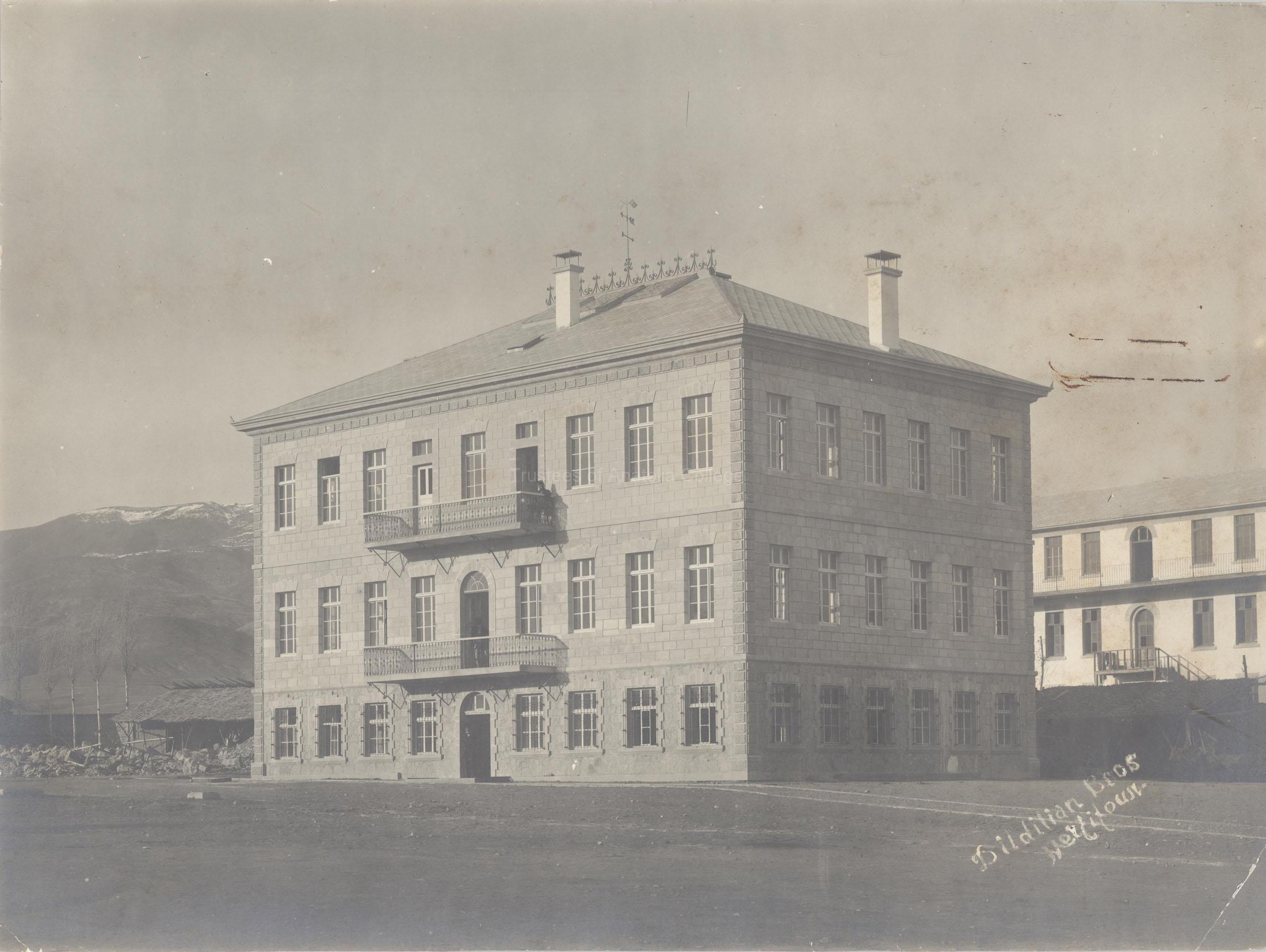 The School President, Dr. Charles Tracy turned to the College’s students and alumni for assistance in financing a new building to house the growing library and museum collection. A bond of loyalty to Anatolia had developed among alumni, as expressed by the custom of the graduating class pledging a sum to be raised for the school. The Alumni Association, founded in 1891 during George Herrick’s short presidency, regularly assisted the College by contributing scholarships and prizes. It now led a successful effort to raise $4,000, an unprecedented sum from local donors, for a library and museum, to be named Alumni Hall.[5]

In 1911, Ernest C. Pye began to re-organize and increase the collection size. By 1914, Anatolia College had erected a magnificent new 3 story library-museum quarried with local stone. Mr. Pye reports that “Years of struggle and sacrifice on the part of alumni and students have culminated in this, architecturally, the finest building in the whole province of Sivas. Seldom has a building been more appreciated, seldom has more gratitude been felt toward the builders.”[6 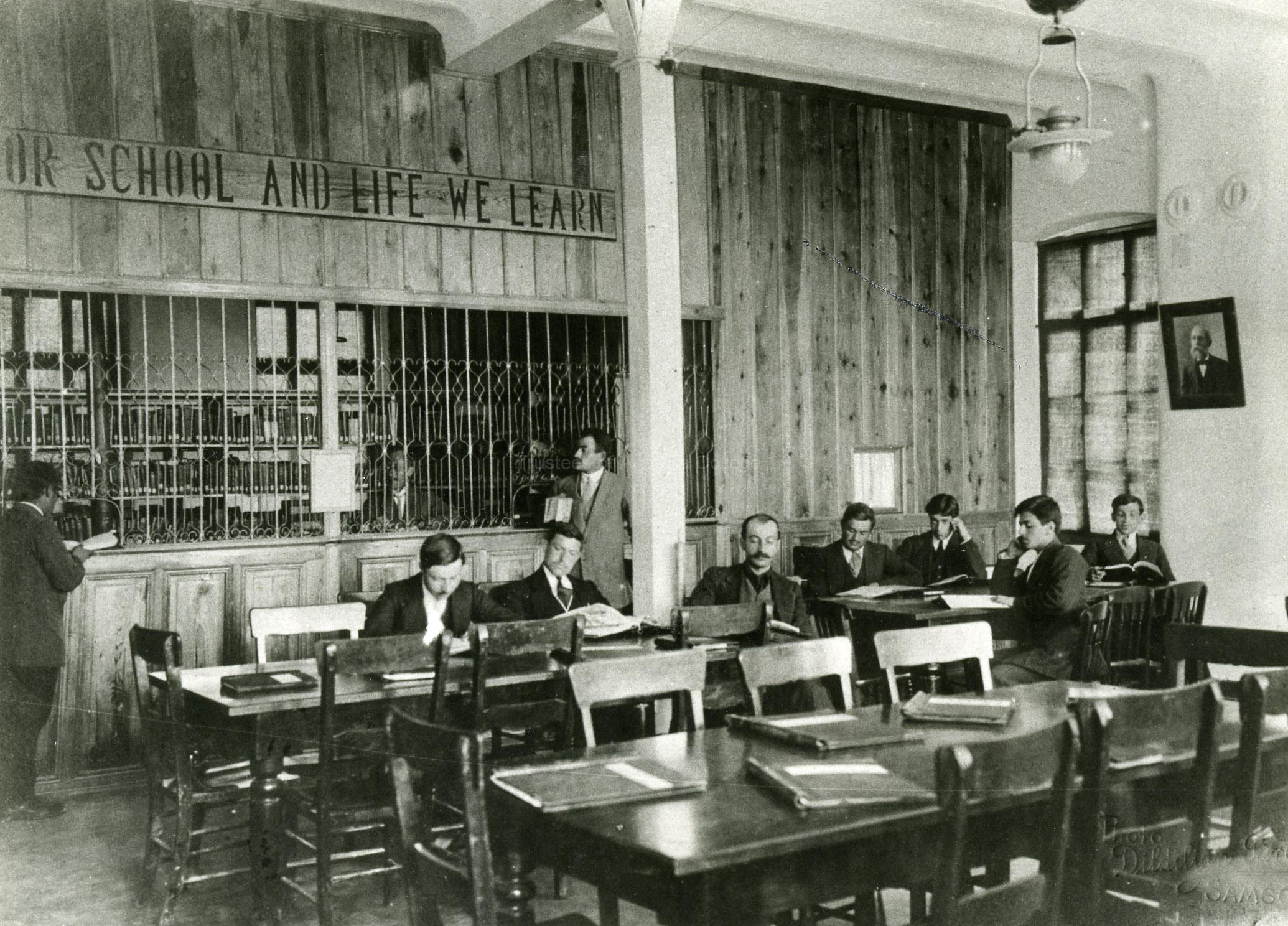 The natural museum, attached to the library, grew to contain more than 6,000 specimens of flora, fauna and minerals from the Marsovan region along with an extensive accumulation of butterflies and moths, many identified for the first time. Unique ancient artifacts were also contributed by the school’s “Archaeological Club.”[7]

As the school grew and prospered in the early 20th century, it also faced xenophobia, opposition and fear from local authorities. The library was not immune from investigation for providing “provocative or revolutionary material” to Anatolia students. In 1920, Turkish soldiers, trying to uncover evidence of disloyal political activity entered the library where they saw a map engraved with the word “Pontus.” They also discovered historical texts that satisfied their conviction that Greek faculty and students were linked to seditious revolutionary organizations. Professor Demetrios Theocharides was arrested along with three students: Simeon Ananiades (President of the Pontus Club), Charalambos Evstathiades (Vice President), Anastasios Pavlides (Secretary). The Pontus Club was the Greek literary society that had existed for many years. Nonetheless, since “Pontus” was deemed code for union with Greece, all four were found guilty of sedition and hanged, and the Turkish government subsequently ordered that Anatolia College be closed. It was time to move.[8]

By 1924, the College found a new location in Harilaou, Thessaloniki. The library was relocated to a rented casino on the site of the present-day stadium. Tables and chairs were furnished from local coffee shops, while the dormitory was relocated to an old military barracks.[9]

By 1934, the College moved to its new location in Pylea, and the library was reorganized in Macedonia Hall.[10]

In 1941, as invading German forces continued southward beyond Thessaloniki, German authorities on April 11 ordered all those residing on campus to depart within four days. Manos Iatrides ’46, recalled helping to load part of the library collection on a truck for storage at the home of art teacher George Paralis. When German officers requisitioned their residence, forcing the Paralis family to move elsewhere, they first cemented up their basement, and the German occupiers never realized that the library was hidden right under their feet.[11]

After the occupation, Theano Tiriki, ‘31, resumed her long and devoted library service. Her formidable task was to restore the decimated collection. Through the assistance of alumni and friends in recovering lost books, the library soon recovered to about ten thousand volumes.[12]

While Anatolia made every effort to avoid political strife during the Greek Civil War and its aftermath, the college’s Greek personnel remained vulnerable. An early example was Socrates Eleftheriades ’30, who upon graduating joined the staff as a librarian. He continued to work with Theano Tiriki when the school reopened after the occupation, and was promoted to the rank of assistant professor following his studies in the United States. But when his dentist brother was charged with pro-Communist leanings, Socrates heeded warnings by departing for California in 1954, where he continued his library career.[13]

In 1961, the library was relocated to the Lucas P. Kyriades Science Building and was dedicated in the fall during a visit by King Paul and Queen Frederica of Greece.[14] It was in this location that Head Librarian Patricia Kastritsis also served as High School principal, taught English, and organized Forensics competitions.[15]

In 1989, Anatolia built and opened a brand new library named in honor of Socrates and Olga Eliftheriades for their service and major gifts to the school.The library greatly boosted Anatolia’s mission to deliver a unique and inspired amalgam of Greek and American education. Anatolia, while implementing the state curriculum, encouraged students to broaden and deepen their learning experience by exploring the library’s open-shelf collection and borrowing books. Moreover, the Eleftheriades Library serves as a resource center for extracurricular activities as well as a favorite place for faculty to meet and prepare lessons. By computer labs and a well-equipped amphitheater, it has also become the locus for introducing staff and students to information technology. A campus-wide task force has designed band new computer applications, assisted by a major grant from the Andrew W. Mellon Foundation. Under librarian Patricia Kastritses, the Eleftheriades Library grew and flourished. Remaining open evenings and Saturdays for boarding students and visitors, it came to serve in many ways as Anatolia’s cultural center.[16 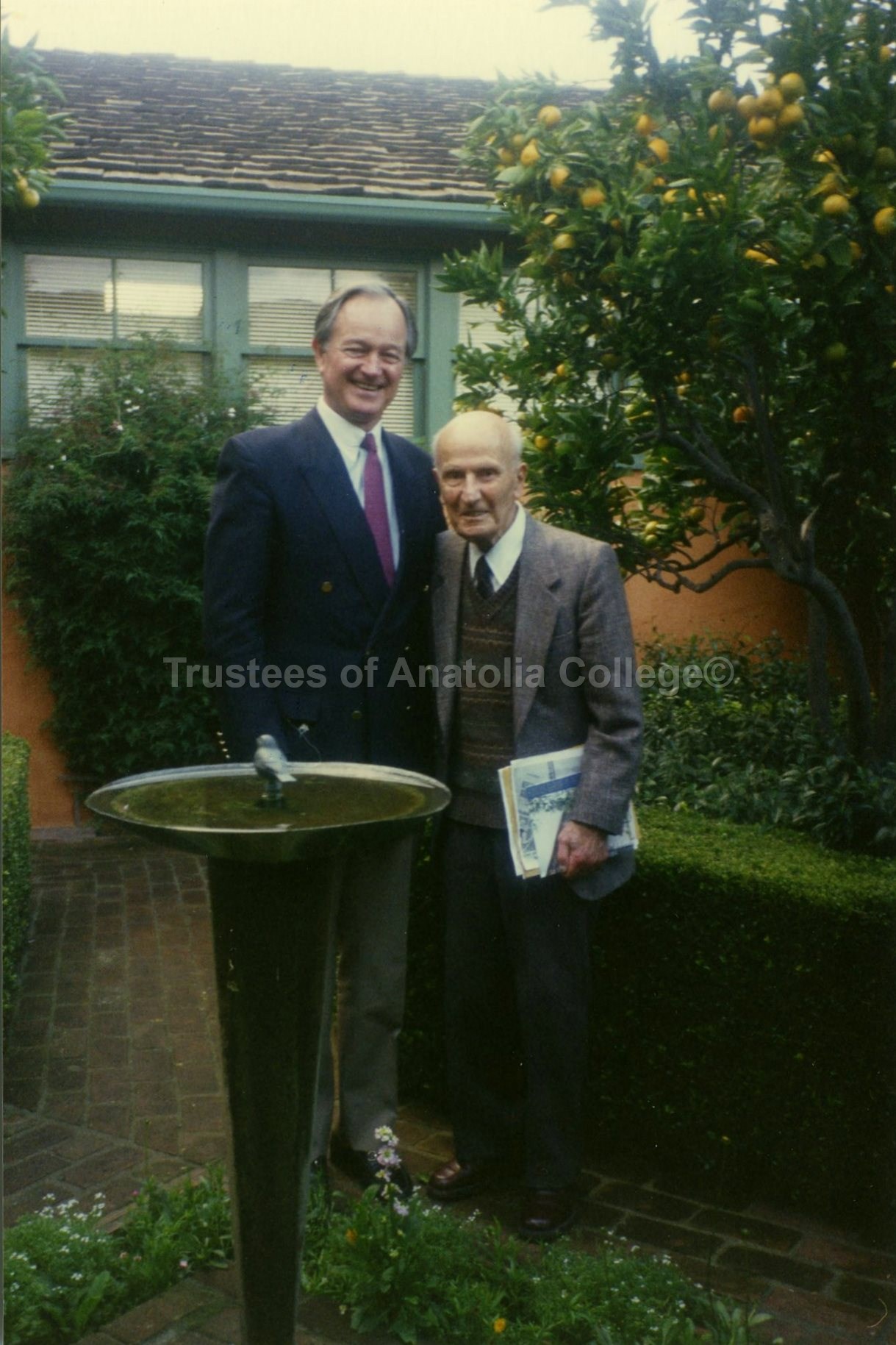 Finally, in 2000, Board Chairman George Bissell pledged a major gift for a brand new library on the ACT campus to strengthen its bid for accreditation. The Boston firm of Shepley, Bulfinch, Richardson & Abbot provided an architectural scheme partially revised by Petros Makrides and Associates, who had prepared the master plan for the north campus. It projected a three-story steel, limestone, and glass structure of 4,845 square meters with the capacity to house up to 100,000 volumes as well as providing reading areas, classrooms, computer labs, and faculty and administrative offices. The new facility incorporated the most advanced features of contemporary library technology, including multimedia resources. With an estimated price for construction and furnishings over $8 million, it was the most ambitious structure undertaken at Anatolia. By vote of the trustees, this striking addition to the ACT campus was named in honor of George Bissell, whose financial contribution, ultimately reaching over $3 million, was the largest ever received from an Anatolia trustee. Following a groundbreaking ceremony in May 2000, the new library was ready to serve the academic community in the fall of 2002.[17